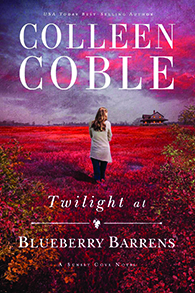 It’s almost time to read Twilight at Blueberry Barrens, the final book in the Sunset Cove series. I can’t wait to share it with you! You can grab the digital version for only $4.99 from all the digital retailers. Go here for links to most of the retailers: https://colleencoble.com/books/twilight-at-blueberry-barrens/

If you’d like to grab a physical copy, my publisher has teamed with Christianbook.com to offer an unpublished scene from the series. Go here for that deal: http://tinyurl.com/j4gkjdg

Brenda Novak had this to say about Twilight at Blueberry Barrens: “Incredible storytelling and intricately drawn characters. You won’t want to miss TWILIGHT AT BLUEBERRY BARRENS!”

It also received a STARRED review from Publishers Weekly! Love and murder pair up effectively in the second Sunset Cove page-turner (following Mermaid Moon). Kate Mason’s blueberry barrens have withered, so offering the cottage on her coastal Maine property to the intriguing Drake Newham and his two nieces offers an attractive alternative source of income for the summer. Playing nanny to the girls helps distract Kate from the trauma of having come across the bodies of Drake’s brother and sister-in-law, the girls’ parents, after an apparent murder-suicide. But Drake’s investigation into those suspicious deaths, along with the puzzling break-ins on her property—is it her escaped convict uncle or an unknown stalker?—keep Kate, and the reader, on edge. The mutual attraction between Kate and Drake is frustrated time and again by the dangers that keep cropping up. The tension, both suspenseful and romantic, is gripping, reflecting Coble’s prowess with the genre. Adding depth and contour to the drama are subtler subplots, most notably Kate’s long struggle with self-worth, complicated by her recent health issues. Her sister, Claire, proves instrumental to Kate’s emotional and spiritual healing. Fans of the series will love seeing Claire and her fiancé, Luke, play strong supporting roles in this installment. (Sept.)
Reviewed on 07/22/2016 | Release date: 09/01/2016 |

3 thoughts on “Preorder Price of $4.99 for Twilight at Blueberry Barrens”